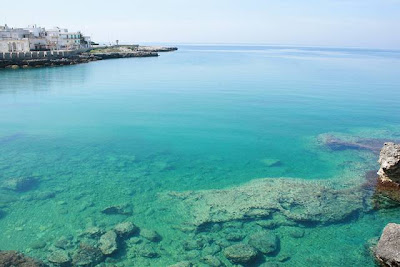 Puglia contains the provinces of Bari (also the name of the regional capital city and now a chic resort), Brindisi, Foggia, Lecce, Taranto and the new-born BAT (including the territories and the towns of Barletta, Andria and Trani). It covers an area of 19,356 sq km (7,474 sq mi) with a population of some 4 million. Puglia forms the heel of the Italian boot, jutting into the Ionian and Adriatic Seas towards Albania and forming the Gulf of Taranto to the west. The original inhabitants were probably from Illyria and Greece, and Hannibal and Frederick II were just two of the many invaders who passed through and left their mark (Puglia’s ports were also stopping points for the Crusaders in the Middle Ages). More recent ‘invaders’, who are claimed to have caused an increase in crime in the region, include Albanian and Kurdistan refugees, who frequently wash up on the shores of Puglia.The region has low rainfall and chronic water shortages and therefore only crops resistant to drought are successful. [...] The huge Tavoliere plateau near Foggia is a rich grain-growing plain producing around half of Italy’s durum wheat (for pasta); other important crops include olives, of which Puglia supplies around half the country’s needs, almonds and grapes (for wine). There’s some heavy industry at Bari, Barletta, Brindisi and Taranto, but the region has a high unemployment rate. The Gargano peninsula in the north-east has a steep, rocky coastline and peaks rising to around 1,000m (over 3,000ft); it encompasses a national park, where wooded crags thrust into the sea towards the tiny Tremiti Islands. Here lie the historic sanctuary of Monte San Angelo, attractive towns such as Peschici and Vieste, and tourist amenities such as the holiday villages at Pugnochiuso. The impressive grottos or Caves at Castellana are a major tourist attraction, as are the 13th century fortress of Castel del Monte in Andria and the marine grotto of Polignano. Property: The cities of Bari, Brindisi, Foggia, Lecce and Taranto contain superb examples of Baroque and Romanesque architecture. Unique local forms of architecture include white-washed houses with dark conical roofs known as trulli, which are found only in Alberobello, and isolated, walled country farmsteads (masserie). Traditional country and coastal properties include attractive, whitewashed cube-shaped houses. In general, property is reasonably priced except in the centre of cities; centrally-located property in Ostuni or Vieste costs from €1,000 to €1,800 per sq m, although prices in Barletta rise to €2,100 per m2. The property market is currently buoyant, although Italian buyers far outnumber foreigners; the few foreign buyers favour Brindisi, Gargano and Lecce area. Communications: A motorway and railway line run along the Adriatic coast, but connections to the west are difficult due to the Apennine mountains. The region’s main domestic airports are Bari and Brindisi. Regular ferries to Greece and the former Yugoslavia operate from Brindisi and Otranto.