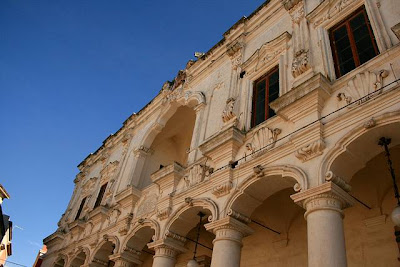 The Salento peninsula in South-Eastern Puglia extends, between the Adriatic and the Ionian Seas, from the last hills of Murgia to the headland, Capo Santa Maria di Leuca, and its celebrated homonymous sanctuary, marking Finibus Terrae, which was probably built over the ruins of an ancient temple dedicated to Minerva. The Salento peninsula is prevalently calcareous, with a typically Karstic landscape, not rich in surface waters, featuring a profusion of underground craters, caves and grottoes.
In the course of the centuries, the landscape was moulded in turn by Greeks, Romans, Byzantines, Normans and Aragonese as this borderland acquired increasing strategic and commercial importance. (…) 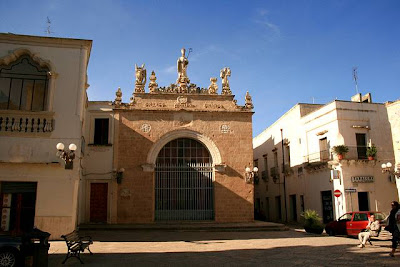 However, the distinctive character of the Salento peninsula comes from a series of architectural achievements associated to an artistic phenomenon known as Barocco Leccese, which developed in Lecce, Salento’s historical and artistic centre, and in Terra d’Otranto between the second half of the 16th century and the end of the 17th century. In those years, thanks to a particular combination of ideas and circumstances, the culture and urban structure of both town and province were totally re-modelled with works composing an unmistakable urban fabric of extraordinary architectural and artistic value. The local stone, a compact-grained marbled limestone “honey coloured, that can be carved with a penknife” (Cesare Brandi), used as building material greatly enhanced the creativity of local artists. The stone is soft and easy to cut, and it used to be hardened and made resistant to rain and humidity with a very particular process: it was soaked in fluid containing whole milk and this reduced its porosity making the surface hard and compact. (…) 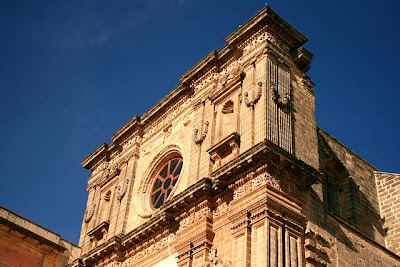 Nardò, at the heart of the Salento peninsula, was an important centre in Roman times and increased its cultural, political and economic relevance during the Middle Ages and the Renaissance; in the 18th century, the works of the celebrated Neapolitan architect, Ferdinando Sanfelice, gave it its distinctly Baroque characteristics. This brilliant artist personally designed the church della Purità (1724) and the Cathedral’s new façade (1725) and gave impulse to the innovations, already in full swing, focussing on a re-definition of architectural volumes and of the urban structure; the outcome can be admired in the scenic street wings, in the variety of road tracings (a good example is the one connecting the churches Santa Teresa, Santa Croce, San Francesco di Paola, Santa Chiara and San Giuseppe) and in several picturesque villas in the suburban area. (…)

Justification for Outstanding Universal Value
Satements of authenticity and/or integrity
These cities have maintained what is known as ‘Barocco Leccese’ – the urban and architectural structures as well as and the decorations – so that this style’s building, technological and formal characteristics are easily identifiable. Restorations were performed following adequate methodologies by the competent Superintendent and further improved this property’s state of conservation.

Comparison with other similar properties
The architectural school known as ‘Barrocco Leccese’ may , in general terms, be compared to that in Western Sicily (Noto, Siracusa, Catania) which, however, was accomplished in one particular circumstance, in the 17th century, immediately after the terrible earthquake. On the contrary, the ‘Barrocco Leccese’ covers a much longer period so that a series of buildings, erected at different times, show an extraordinary continuity of style.

Read the full article on http://whc.unesco.org/en/tentativelists/1149/